One of my former 753 students still posts to her class blog. Take a look at her short post about MySpace and the comments that followed.

I pointed out that the teens who were on the Teen Council were probably the stereotypical “good kids” who already obey their parents and wouldn’t be the ones who’d “misuse” MySpace anyway, or be taken in by predators pretending to be peers, or whatever all else their parents have spooked them with. 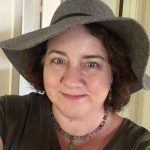