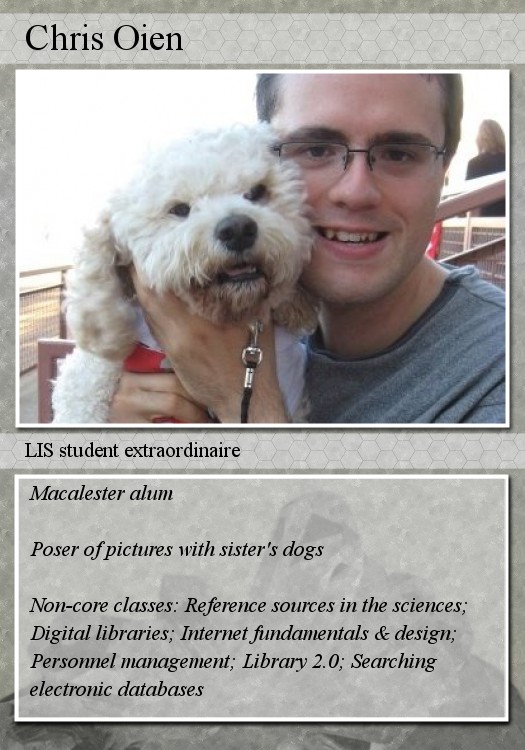 In Michael’s Library 2.0 class, I had the opportunity to read Blink by Malcolm Gladwell, and I wrote up the lessons I thought libraries could take from it as they seek to better themselves in a Library 2.0 world. Here’s the condensed, bloggy version of what I took away.

Lesson one: The Aeron chair. This chair was break aesthetically from how office chairs had always looked, but despite some initial outside skepticism, the design team persevered because they knew they had created a great project; the chair came to be the company’s biggest seller. Similarly for libraries, it is important not to reject ideas for fear of disruption or anything being different. Maybe people will grumble about a new website design at first because the way they’ve always gotten to things isn’t there now. But if it adds more features, allows for more interactivity, gets captured better by search engines, etc., dealing with some short-term uncertainty is ok. You set yourself up for more long term success.

Lesson two: New Coke. The disaster that was New Coke came about in large part because Coca-Cola designed it to do well in taste tests where it was sipped. But people don’t drink Coke by the sip, they drink it by the can, and the impression after one sip is much different from the drinking a whole can. Libraries should also be careful about how they get feedback from patrons. Do your survey questions capture how patrons experience the library? If testing your site, maybe they can find the Help section on your website when you ask them to, but will they think about finding it when you don’t explicity tell them to?

Lesson three: The sculpture’s fingernails. They didn’t quite know how they knew, but several art historians could tell that a sculpture purchased by the J. Paul Getty Museum was a fake; one of them said something about the sculpture’s fingernails just didn’t feel right. They were right. Just like something can feel fake, it can also feel real, spot-on, exactly right. This post from Sarah Houghton-Jan is exactly what I mean. She says about the Vancouver Public Library front page, with pictures of library users and quotes about how they use the library: “Something about it resonates with me, and all I know is that I like it.” That’s just the sort of reaction we should be going for, with designs like that which immediately hit people and say, this is the essence of the library, this is what we do.

Chris Oien is a library science student at the College of St. Catherine in St. Paul, Minnesota.