Via the Pittsburgh Post-Gazette…

Gov. Tom Corbett’s no-new-tax pledge means he has to figure a way to slash billions of dollars across the board from Pennsylvania’s budget, and it’s unlikely libraries will emerge unscathed.

Into this breach steps janet jai of Highland Park. (She had her name legally changed to lower-case letters a long time ago, but that’s another story.) Ms. jai (pronounced like the letter J), 65, has rushed out 500 copies of a self-published, 165-page paperback book, “Saving Our Public Libraries: Why We Should. How We Can.”

We met Monday to discuss her fundraising suggestions. I had coffee and she had tea — or almost did. She’s so passionate about this cause she never pulled out the tea bag. She sipped hot water. “Silver tea,” she shrugged, and we kept talking.

Her book defies quick summary but she makes two key points. The first is that libraries can’t feel they’re being singled out if government is cutting more or less equally everywhere. The second is that librarians must now think like entrepreneurs even as they hold fast to Andrew Carnegie’s “free to the people” credo.

I was drawn immediately to a quirky suggestion on page 149. She knows people want to be remembered, and also knows most of us aren’t Carnegies. So she suggests small fundraisers that could end with innumerable little signs like the following:

“The lights are on today because of Amanda Smith’s contribution. … Kelly Hu paid for the electricity that makes it possible for you to use this computer. …” 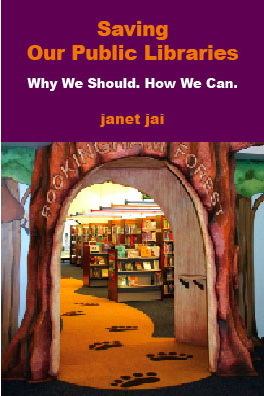 What a great article.  Coming from a librarian or someone directly linked to libraries, a passionate book like this may be overlooked.  Coming from a patron, however, it becomes a whole different thing.  Empowering patrons…it’s just one of the things we’re here to help with.

Read more here: She wrote the book on saving libraries at the Pittsburgh Post Gazette