Note from Michael – I’m deep in two projects today  and tomorrow and haven’t had much time to catch up on the hubub with Harper Collins and ebooks. I can say that I agree with Justin’s take on the potential and promise of promoting content creation, access to technology and building the community memory (whatever community it might be – civic, academic, education) as a big part of our future in libraries. I appreciate Justin’s hard work and insights.

The news about HarperCollins placing loaning caps on ebooks in the Overdrive catalog—known as #hcod on Twitter—gobbled up my Twitter feed last Friday afternoon.  On one hand, I knew some publisher was going to pull this stunt, so I wasn’t shocked. On the other, I learned two things about libraries and the profession in general.

First, the lending-digital-goods jig is up. With DRM, publishers have found a way to cut out libraries and used booksellers. This kind of greed is absurd when you consider how much business libraries give the major book publishers. The average annual teen book budget I’ve worked with over the years at a few different libraries is $20,000—and that’s often one of the smaller pieces of the pie. Adult public library book budgets for systems serving upwards of a million people range from a cool $1 to $2 million. And let’s remember: libraries don’t ever return books. The obvious solution to the HarperCollins slight is to stop buying its wares. The lack of library cash flow will speak loudly. Also, no more booktalking HC’s backlist or generating word of mouth, the rumored force behind best sellers. You’re grooming your next Neil Gaiman, HC? Wonderful! Good luck making him or her a star without our readers advisors and community centers, where people can talk about what their discovering in the stacks.

Now, let’s all quit being shocked that the ebook loaning cap happened and take the long view of digital goods in libraries. Two of the so-called Big Six book publishers already refuse to lend ebooks to libraries, Macmillan and Simon & Schuster. Overdrive, the vendor involved in the HC incident, is a pile of garbage in terms of usability. Don’t believe me? Read this comic. 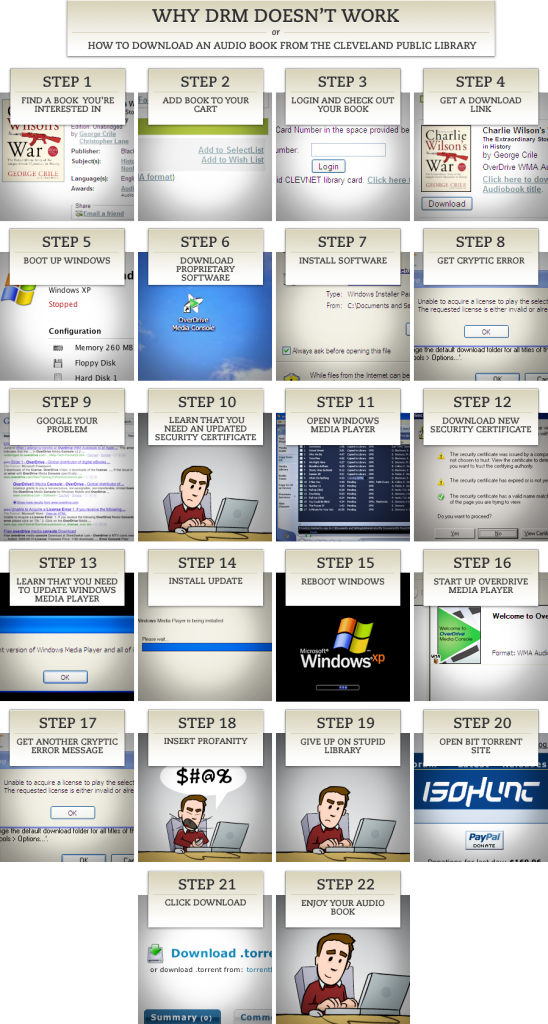 Tell me you haven’t run into this problem before. As a Teen Librarian, I’m working with the one-click-and-the-file-saves-to-your-computer generation. Do they use Overdrive now? No. Will they later? Doubtful, if the interface and DRM remain. Does this bode well for the future of library services and literacy? For an answer, look at what’s happened with digital music products for libraries. Like ebooks, they are locked up in crazy DRM or come with an insanely high price tag. Let’s not even get into databases.

The second thing I learned from this incident is that the library world is terrible at advocating for itself. DRM and greedy publishers are here to stay. No number of tweets, emails, or blog posts is going to change their minds. If HC and other publishers in their wake want to cut us out of the ebook market, let them—it gives us a chance to do what we need to do, that is, reinvent ourselves. REVOLUTION!

What do I mean by “revolution”? Let’s use this slap in the face as an opportunity to make libraries modern institutions. For a while now, we’ve loaned popular materials like DVDs in our communities. To many people, libraries are like free versions of Blockbuster. Meanwhile, our unique local collections are hidden away, either hard to browse or physically out of reach. Instead of giving patrons access to cutting-edge technology they can use to create original works and teaching them how to use it, we give them basic Internet connections so they can watch YouTube clips and Facebook themselves into oblivion. We’ve become lazy, boring; extensions of people’s living rooms, essentially.

And now that we’re being squeezed out of lending popular materials like ebooks, what do we lend out?  The answer is simple: we turn to our community to create the content that we collect.  We “check out” distinctive experiences and educational opportunities to our patrons instead of the Twilight saga ad nauseam. We become the go-to place for people to record music, film movies, write original stories, and do anything else creative, educational, and life-improving.

We then take these works and make like libraries and catalog, store, and share them. Sure, we may only have one or two ebook copies of James Patterson’s crapfest, but look at the awesome content we’re encouraging our community to create! The best part? It’s one-of-a-kind material that we can now share easily with the world. The other rad part? We’re empowering our patrons to become creators instead of consumers.

Finally, the first person to say, “But my library doesn’t have the money to do this kind of stuff!” in the comments section loses. It’s easy.

As for my take on DRM, cut and paste what Cory Doctorow has said and put it in my mouth because I feel the exact same way. It’s a bad, ugly thing. His post on the #hcod debacle was brilliant from start to finish, but this chunk of gooey goodness keeps on repeating in my mind:

And that’s why libraries should just stop buying DRM media for their collections. Period. It’s unsafe at any speed.  I mean it. When HarperCollins backs down and says, “Oh, no, sorry, we didn’t mean it, you can have unlimited ebook checkouts,” the libraries’ answers should be “Not good enough. We want DRM-free or nothing.” Stop buying DRM ebooks. Do you think that if you buy twice, or three times, or ten times as many crippled books that you’ll get more negotiating leverage with which to overcome abusive crap like this? Do you think that if more of your patrons come to rely on you for ebooks for their devices, that DRM vendors won’t notice that your relevance is tied to their product and tighten the screws?

Cory’s got it right: stop giving them our money. Instead of buying 80 copies of Dan Brown’s bound schlock, buy some cheap netbooks, toss on some open-source software that will turn patrons into creators, and lend them out. Invest in your community instead of bleeding time and money on ebook garbage.

MUCH LOVE GOES OUT TO:
In no way am I the first person to ever say something along these lines:
Thank you DOK Library Concept Center and Eli Neiburger (watch #1 and #2)