Skip to content
I’m so happy to see John Schumacher named a Library Journal 2011 Mover & Shaker! John was a student in three of my classes. His work  – with a strong focus on serving the needs of children – was outstanding in all of them. It’s so good to see him putting his skill set into practice.  Congrats Mr. Schu! 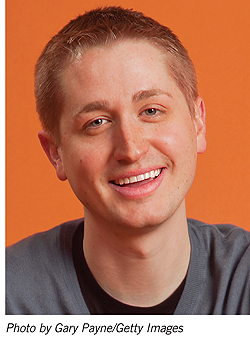 This makes John Schumacher (aka Mr. Schu) an xtreme librarian: he uses a high level of exertion—along with some gear and stunts—to get kids reading.

Examples of his xtreme tactics include visiting Anderson’s Bookshop almost every day, “so that there is always something new to show the students.”

Or blanketing the bathrooms with lists of new books. “I know they are reading in the bathrooms,” Schumacher says, “because they come in and tell me something I’ve only posted there. I’ve pretty much taken over the whole school.”

Come spring, students vote on their favorite character and the winning character gets to go on vacation with Mr. Schu, videotaped for the kids back home (Knuffle Bunny at the Ben & Jerry’s factory!). He even sets reading goals for himself (1,705 items in 2010, 2,011 in 2011, some on audio) and updates the whole school on his progress.

It’s in his use of technology that Mr. Schu has gained the most notice, like his project with QR codes, two-dimensional barcodes that can be read by a camera on a smartphone.

He had his fifth graders write book lists and reviews, then QR code their suggestions so that other students could see what they like. Few have smartphones, so Schumacher lets the students use his iPhone to walk around the library and read what they created.

“It will draw them into the books, and perhaps they’ll read something they haven’t read before,” he says. “I’m really big on advertising.”

Read about all of this year’s M&S here. Congrats to all!