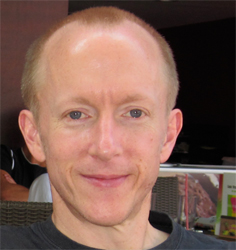 Back in late 2008, I received a phone call from a friend/colleague in Germany with a tantalizing offer: would I be interested in a three-semester teaching gig? The location was the University of Applied Sciences in Leipzig (Hochschule für Technik, Wirtschaft und Kultur – HTWK) [http://www.fbm.htwk-leipzig.de/de/fakultaet-medien/], and the job was a paternity leave replacement for their professor of electronic publishing and multimedia in the College of Media.

How could one say no? I was feeling a bit stale in my library work, and know from past experience that I enjoy teaching semester-length courses and possess some teaching skill. That I would be teaching in my second language was a bit daunting. In fact, that fear had led me to turn down an interview offer for a similar full-time position a number of years ago. There were also personal considerations, as it would mean doing a crazy bi-continental split family commuting thing. So of course I said yes.

It was a bit unclear before I started what and whom I would be teaching, but I thought it would be mostly in the LIS program. The HTWK’s College of Media has seven programs, and as it turned out, I taught only about 30% of my courses for LIS, with the rest divided between three other programs: two publishing programs (production and management) and museum studies. Teaching outside of my professional wheelhouse just upped the challenge ante, and in the end made the time richer and more personally rewarding.

The HTWK’s library program has a fairly traditionalist reputation. Students still learn cataloging principles, bibliography, etc., but the curriculum is modernizing. It also bears noting that in Germany, which has a two-tiered profession with two kinds of librarians—well, actually three now, just to spice things up—that the kind of librarians we were educating will be hired into line librarian positions and generally find the pathway to administration barred. As such, teaching basic library skills makes some sense, since the market is going to demand them for a while yet.

Another significant difference between North American and German library education is that Germany still has a bachelor’s level LIS degree, which is a professionally qualifying degree. As such, the majority of German librarians lack a graduate degree or a bachelor’s degree in another field. Needless to say, this affects LIS education and the profession in many ways, and is essential to understanding the core differences between German and North American libraries.

But what of the students? They’re a great lot for the most part: motivated, dedicated to libraries, keenly aware that the profession and institution are changing. Given that they choose to study library science without necessarily having any other post-secondary education, there are a few who seem confused about what is going in in libraries and just sort of drifted along, but that isn’t unheard of in any program anywhere. Even though their program’s curriculum does not support much in terms of new technology, many were quite curious and explored on their own.

Beyond what I was actually supposed to teach them, which for the library program centered around video production (see the often poignant and funny results here [http://www.youtube.com/playlist?p=PL0DBC1144AAEB1C3F&feature=mh_lolz]) and electronic publishing (translation: designing Websites that don’t stink), students got an earful of other topics from me. I sensed hunger and interest, so I just rolled with it.

First and foremost, I dragged them into the social media realm. They knew of its existence, of course, but they had never blogged, none twittered, and they never touched things like Wikipedia editing or other such UGC sites. I built a lot of this exploration into my classes, and left behind a passel of social media mavens. This is something I did in all of the classes I taught, regardless of field, and it’s been gratifying to see it take off.

Beyond social media, they heard about the current state of technology in libraries: link resolvers, ERMs, catalog overlays a la VuFind, and so on. Libraries in Germany (well, some) are hip to these things, of course, but this hasn’t trickled up (down?) into the LIS programs, at least not in Leipzig. Most students heard of a link resolver for the first time from me—including those in higher semesters—even though one could suggest that the OpenURL was a disruptive technology. Students in the publishing programs could not escape learning about scholarly publishing and open access, areas their programs otherwise ignore, despite the presence of major publishers (and potential employers) such as Springer and Wiley.

For my part, teaching there was as challenging and rewarding as I could have dared to dream. When I look back on my career, this will remain a highlight. On the other hand, it was utterly exhausting, and after 18 months I was so happy to be done. At universities of this type, instructors carry what in North American terms would be a 5-5 load, meaning five courses per semester; in my first and third semesters, I had five preps to boot. It’s a harrowing load, and even though I’m about as fluent in German as a non-native speaker could be, doing this much teaching in a second language (where every conversation, lecture, question, joke, etc. is about 10% harder mentally), there were days when I arrived home (to my brave daughter who did third grade in Germany with me while mom and sis were in the U.S.) utterly incapable of forming further speech nor doing anything other than watching mindless TV.

I’d be remiss if I failed to mention the awesome colleagues I found in Leipzig. Truly dedicated professionals all, they welcomed me and my ideas openly and warmly, and I can only hope that our professional lives collide again down the road. Most importantly, the HTWK friend who made the original call supported me in word, deed, and with caffeine, and to him I owe a debt of gratitude that may take a lifetime to repay.

What saddens me as a librarian is how eager German librarians and library students are to experience and learn from North American libraries, but how little of that interest flows in the other direction. Language plays a role, of course, but it would be so beneficial for the profession on this side of the ocean to broaden its horizons beyond English-speaking nations. It can be done.

After serving libraries at Washington University, the University of Utah, Yale University, and Kansas State University, Dale Askey currently fills the role of Associate University Librarian for Library and Learning Technologies at McMaster University in Hamilton, Ontario. Although firmly ensconced in the library information technology realm, his educational background is in the humanities, specifically German language and literature. This piece reflects on his experiences from March 2009-August 2010 as teaching faculty in Leipzig, Germany. He blogs semi-regularly/professionally at Eintauchen/Dive In
[http://htwkbk.wordpress.com].