Note from Michael: I’ve followed the “23 Dingen” programs facilitated by my colleague Rob Coers in the Netherlands for some time while working on the Australian research project. I’m hoping to expand my research into this part of the world as well as North America in the next year. For now, here’s an English translation of a great post about the recent Sharing Day. Thanks Rob!

Update: Rob writes: “Latest…in case you understand Dutch,the videos have come available during the weekend. You can check them on the Program page.”

In the past four years the 23 Things learning program has had quite an impact on people who work in various kinds of libraries. Thousands of university, corporate, school and public librarians in the Netherlands and Flanders (Belgium) now have a better understanding of Web 2.0 and social media. The outcome of the program, originally started by Helene Blowers and translated and adapted into Dutch as 23 Dingen byundersigned, has been the subject of a survey by Helene and one in Australian libraries by Michael Stephens. 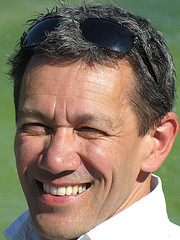 Every now and then people ask me “Do you have an overview of WHAT libraries have done after they finished the program. Are there new 2.0 based services, new ways of collaboration, new ways of interacting with patrons?” And, honestly, I could never give an informed answer to that.

So… the idea was born, to organize a symposium on June 7, hosted by the Amsterdam Public Library (OBA), and to make this event a get-together with the aim to share ideas and products and to go back home with a trunk full of inspiration.

The day was attended by 200 librarians and hundreds of people were watching it live from their libraries or homes.

Shortly after the event Jan de Waal (aka @digibieb on Twitter) produced an amazing iMovie video. It’s a one-minute impression at the scene and a call to come again in 2012.

Twitter wall, thesis and older tweets
After launching the hashtag #23ddd in March, people started using it in their updates. Actually, promotion of the 23 Dingen Deel Dag – 23DDD (23 Things Sharing Day) was done only via social media like Twitter, Facebook and a dedicated website. On the day of the event, approximately 1300 tweets were sent from mobile devices and computers, using the hashtag.
After each speaker had finished, there was time for questions from the audience and we looked at the Twitter Wall for questions and remarks that showed up, also coming from outside the building.

Older and current tweets can be found via Twitter Search (Google Translate), but it’s unkown whether the result will still exist in a few weeks or months.

We asked the audience to send in a thesis that would be discussed in the room. There were some great ones (Google Translate), good food for thought, but the winner was “As long as libraries are not judged by their quality, but numbers of loans and numbers of members, Web 3.0 is a farce”

Presentations
Two keynote speakers, Hans van Driel speaking on the the transition from Society 1.0 to living together 3.0 and Barry Spooren speaking about their use of social media in organizing the international (music) Festival Incubate,were followed by 10 pitch talks. These were all done by librarians who proudly presented their product as a result of the 23 Dingen program. The list of speakers and their presentations can be found in the Program (Babel Fish translation).

Livestream
Anyone who could not personally attend the day in Amsterdam, was able to follow the symposium from beginning to the end, thanks to a magnificent broadcast by the OBA library crew. We received several comments from people watching at their libraries or from their homes, that the HD quality from four cameras and the great sound gave them the idea that they were there. The presentation recordings will be made available very soon.

Quotes by some of our speakers

“We see a shift from society 1.0 to living together 3.0. where differentiation and informal learning are key. Libraries need to understand the 2.0 phase in order to survive in the 3.0 era” – Hans van Driel”

“Whodunnit is an interactive multimedia game, that the library can develop in cocreation with teens. It’s a mix of 2.0 tools in a CSI-like setting” – Saskia Dellevoet

“We organize the Incubate Festival according OpenSource principles, together with bands, artists and audience. Think of this for your library!” – Barry Spooren

Rob Coers works as an internet trainer, consultant and speaker in The Netherlands. After meeting Helene Blowers in 2006, Rob introduced and developed the Dutch version of the Learning 2.0 Program 23 Things. 23 Dingen has become a major success and has helped libraries and thousands of librarians to get familiar with Web 2.0 and social media. In 2005 Michael and Rob did their first talk together at Internet Librarian International in London.