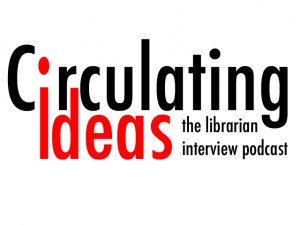 Two years ago, I created the Circulating Ideas podcast, where I talk to cool, innovative librarians about the work that they’re doing to move the profession forward. Ultimately, I’d love if non-librarians listened and learned about all the great work that we do, but I’m thrilled with the fact that most of my audience are my fellow librarians, gleaning ideas and inspiration from my guests.

I do the show on my own time, on my own dime, so upgrading and improving the show takes a personal investment, but I couldn’t do the show on my own. Without my guests, the show is nothing and there is equipment and software I need to make the show happen. So investing in a new mic, purchasing a domain name, and upgrading the software on my machine, among other thing, are all things I’ve done in the past and will continue to do in the future. However, I have goals for the show that I cannot achieve in the timeframe I’d like because I’ve got other things I need to be spending money on (for instance, my children enjoy having food to eat).

So what to do?

Though I’d vaguely considered the idea of doing a fundraiser of some kind for awhile now, I never really felt comfortable with it until I saw Amanda Palmer’s TED Talk, “The Art of Asking”. I’m not going to take the time here to just repeat what she says, but basically, it helped me become okay with the idea of asking for financial assistance for the show. The rise of crowdfunding sites has put the power to fund the creative projects they want to see into the hands of the people. It’s not quite the second coming of patronage, as the artists still maintain most of the control of their product, but it’s empowering nonetheless to cut out the middleman and give funding directly to the source of the creative energy.

So, I created a Kickstarter campaign for the show, and it’s been successful beyond my wildest dreams. I reached full funding for the initial goal in less than two days, but I’ve got lots of other plans for expansion beyond that initial ask, which are laid out in the stretch goals.

If you enjoy the show, I would appreciate any help you can give, even if it’s just passing on the word about the campaign, writing a review on iTunes or just listening to the episodes as they come out. I hope you learn and grow as much as I do from every episode. Our profession is filled with so many interesting people doing such fantastic work. I can’t wait for you to meet more of them through the show.

Note from Michael: Please support Circulating Ideas if you can!