Although we only saw it for that one day, one of the greatest collaborations took place in a library.A brain, an athlete, a basket case, a princess, and a criminal each assigned to write an essay of no less than a thousand words describing who they thought they were. One of the things that always struck me when watching the John Hughes classic The Breakfast Club, even long before I started the MLIS program, was how advanced the Shermer High School library was. Hopefully adding to what Jenkins (2006) calls the “Collective Intelligence” of media fans, I hope to explore what detention in this library would look like in 2013. 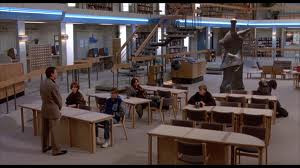 The school comes equipped with fire exits at either end of the library.

In order to do so, we must first look at what this library looked like in 1984. As is traditional for public schools, the library is essentially rectangular (however, it has been given various structures and moldings to suggest a more rounded shape). The majority of the library’s physical holdings are along the perimeter of the two story space. In the center we see a group of six tables. For detention, these are all arranged to face forward (for orientation purposes, we will call the corridor out of the library and towards Dick’s office as the front of the library). However, if we look closer, we can see that some of these desks have rounded edges, suggesting they were meant to be arranged together to form a larger, round table suitable for collaboration. Behind this area, the library has a artwork, a lounge area, and a small bank of computers. Towards the front there is a media center housing audio equipment. The second level also hosts several little rooms that can be used for small meetings.

All of that was way ahead of the times…even more advanced than my high school library in 1990. So we can imagine that, in creating a space for 2013, this library would still remain cutting-edge. I would actually imagine it very similar to the way it was nearly 30 years ago: sans card catalogs, with updated art and architecture, and a much larger complement of computers. We would still see a large area to gather for collaborative efforts (though likely the tables would be the bar-height modular ones), and the media center would boast production equipment for creating video and audio presentations.

I would also like to imagine the administration being creative about how detention is managed. No longer would there be no talking, no moving, and everyone ordered to write their own Saturday morning essays about who they think they are. No, these students in detention would collaborate to blog about it. The computers would not suffer from the techno-banality we heard about in our lecture. They would be fully linked, and these blog posts, from everyone who served in detention, would be accessible to all who wished to see. The blog posts of all who came before, and all who would come after would serve as learning experiences, a means of acknowledging whatever it was that was done wrong, and a reflection of how to not repeat those actions. 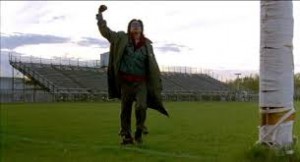 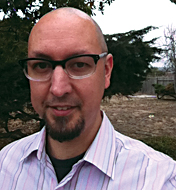 James Yurasek received his BA in Literature from Sonoma State University. He is currently pursuing his MLIS from SJSU School of Library & Information Science, where he is focusing on emerging technologies.