Critics of modern social media and our emerging hyperlinked culture are abundant. So are cheerleaders and utopians, who praise the potential of new media and our always-on, always-connected, society.

Critics warn us that Google might be “making us stupid,” as Nicholas Carr put it. They wonder, as Sherry Turkle has, “Why do we expect more from technology and less from each other?” They worry that we are becoming overloaded with information, unable to focus on sustained chains of reasoning, and “driven to distraction.” They express concern at the tendency for Facebook to make us depressed. They point out that—like junk food, pornography or drugs—the Internet has a great potential to be addictive. Critics often emphasize that the Internet has become over commercialized and is robbing us of our privacy.

At the other extreme are the cheerleaders. Excited by the possibilities that the Internet has created, these cheerleaders are often guilty of wishful thinking that leads to vast exaggeration of Web 2.0’s possibilities. They see it as overturning existing government and business hierarchies, flattening the world, and doing away with the necessity for information authorities and taxonomies. They emphasize its “power of organizing without organizations.” On the extreme edge of this utopian realm of modern communications, are those who see us evolving into an eventual “singularity” with our digital devices—where artificial intelligence will allow us to escape the limitations of our biological bodies.

Until I read Net Smart: How to Thrive Online, I thought its author, Howard Rheingold, was a cheerleader. He is often credited with inventing the term “virtual community,” was advocating for the power of computer networks to create new forms of community long before the World Wide Web was invented, and has long toyed with the idea that computer technology can enhance our ability to work cooperatively and amplify our creativity.

However, in this book, Rheingold’s position is much more nuanced, and indeed helpful, than that of either the critics or the cheerleaders. His goal is to help us use social media well. He sees its potential to do tremendous good. He recognizes the legitimacy of many of the critics, but wants to figure out how to overcome these challenges, rather than simply give up in the face of the problems the critics identify. He wants us all to use the Internet mindfully and wisely, so that we are each able to expand our own personal potentials and at the same time unleash collaborative efforts that could enrich all of our lives.

Here is the author’s own teaser for the book. Take a look; it’s just a minute long.
http://www.youtube.com/watch?v=QzZSIzBe6w0

Rheingold’s thesis is that the Internet can make us either smart, or stupid. It can help us build communities, or isolate us. It can be a great way to learn, or an unproductive waste of time. It depends on how we use it.

The author proposes to show us five key information literacies that are essential to this task. He gives each of these literacy skills a full chapter. The five literacies are:

1.  Attention. In my view this is the most important chapter in the book. Attention is a skill that can be trained. Social media can be incredibly distracting. But we can take a “meta-cognitive” approach to it: Paying careful attention to exactly how we are deploying our attention. (Yes, I do mean to say “paying attention to attention.”)

Should we be clicking on the Facebook icon? Or would our attention be more skillfully used in continuing to write a report for our boss?

The answer to such a question is not always obvious. Here is a similar choice: Perhaps you are doing a Google search. Several of the results have nothing to do with the subject matter that you were researching. Should you avoid them? Maybe. Chances are it would be a waste of time to focus your attention on something that isn’t the question at hand. However, it is also possible that serendipity will lead you to uncover something new that you can use in a different context. Yes, answers to questions like this are not formulaic, therefore the point is that you will be better able to make such choices if you are paying careful attention to where your mind is focused—rather than drifting from link to link in a trance-like, mindless, manner.

Similarly, should you be focused on your Smart Phone or watching your kid play soccer? It may depend of the circumstances. Taking a mindful approach, being aware that you are a faced with a choice, and choosing consciously, is a skill that can be learned.

Anyone who has ever tried meditating discovers that their “brain has a mind of its own.” The essence of mindfulness meditation is sitting quietly and paying attention to your thoughts. The most common technique involves focusing on your breath. Almost immediately, your mind will wander off from your breathing. You practice, over-and-over, bringing your attention gently back to your breath. With extended practice, your brain becomes much more able to pay attention, and your mind becomes much more aware of what it is doing. Emerging evidence from neuroscience may confirm that practicing meditation increases our attentive skills.

This kind of meditative practice is one of many suggestions Rheingold makes in this chapter. Most of his tips are similar in that they teach you “to be aware of being aware” and to pay attention, while using social media. They help you to be intentional about your focus, instead of drifting. He also points out that trying to multitask is almost always futile because the attentional energy, in switching rapidly from one task to another, comes at a cost of lost focus and increased cognitive effort.

2.  Crap Detection. This chapter will probably be the most familiar to librarians. It is about effectively seeking accurate information on the Internet. He discusses how to sort out true from false or misleading information. Again, he circles back to the subject of attention, advising readers to learn to use disciplined attention while focusing on their many sources of information, and to make sure that their attention is where they intend it to be while digesting information

3.  Participation. Rheingold puts a lot of emphasis on knowing how to actively participate in web culture, rather than just passively consuming web content. He says that, “Every PC as well as smart phone is a printing press, broadcasting station, political organizing tool, and site for growing a community or marketplace” (p. 249). Knowledge of how to participate in this arena, which is still in the process of emerging, will be a key form of literacy in the future. He discusses a range of participatory activities—from simply tagging or “liking,” all the way up to curating, blogging or community organizing.

Rheingold emphasizes that this kind of participation is both personally rewarding as well as contributory to the common good. He has a number of tips for being aware of your risks (to privacy, for example) and your impact on others as you participate in online activities. He is aware of the capacity of the profit motive to skew online motivations and warns that you may think you are just playing online, but someone else could be growing rich from your actions by harvesting information about your choices.

4.  Collaboration. This chapter discusses emerging technologies and activities that encourage coordination, cooperation and collaboration. Subjects such as crowdsourcing, crowdfunding, virtual communities, non-market social production (for example open source software), and collective intelligence, are discussed. Again this is a chapter that is directly relevant to many of the ideas that we have discussed concerning creating hyperlinked libraries.

5.  Network Smarts. This chapter is about how to participate wisely and effectively in networks. The author discusses academic theories about how human beings have participated in networks, and how this has affected our evolutionary development. Even though modern social media has roots going back to the dawn of our species, modern communications technology expands this and creates new types of relationships among people with innovative social possibilities. Rheingold shows us how to bond, how to build social capital and how to enable reciprocity in these new networks. He advises us how to expand interpersonal trust and form bridges that interconnect people from diverse networks. He places a lot of emphasis on contributing. “Paying it forward,” is a key factor in effective individual participation in networked culture.

Again he also warns about the risks. He understands the necessity of paying careful attention to what you are sharing. He wants us to be mindful about protecting our individual privacy and the privacy of others.

Relevance to Libraries and the Hyperlinked Library Model

This is just a taste of the rewarding banquet available to readers of this book. What can libraries and librarians learn here that is applicable to their work?

First, the book has a lot to say about concepts familiar to readers of TTW: Participation, community, the web as a platform, emerging technologies, social information and knowledge production and so forth. It could easily be used as a text or supplementary reading for a course on the hyperlinked library model. It is filled with valuable references and sources that every emerging hyperlinked librarian would find useful. The author knows his stuff. He has taught, lectured and written on these subjects since the dawn of the Internet. In addition, he has interviewed many leading experts on the topics he discusses. He shares that knowledge.

Second, Rheingold has provided librarians with a useful road map to life in the hyperlinked world. I think this map should be added the standard information literacy curriculum. What could be more important to today’s students than learning how to be “net smart?” I think we already make many efforts in this regard, especially concerning what he calls “crap-detection.” But his notions on participation, collaboration and networking, would provide much useful material for information literacy instruction. His understanding of how mindfulness and attention skills interact with these topics is of great value. All of the skills he discusses could be adapted to make valuable additions to library instruction, from the elementary level through college.

Finally, I think this book is a goldmine of useful ideas for librarians looking for ways to expand and improve upon the practice of their craft as information intermediaries. Furthermore, Rheingold does not merely teach specific skills useful to librarians who want to better understand these emerging technologies, he has suggestions about how to build your own learning techniques and personal learning networks, so that you can stay on top of this rapidly changing world as the future unfolds.

In short, if you are finding this course to be useful, and think that librarians should know more about the ideas presented by Michael Stephen’s in The Hyperlinked Library, then I am sure you will feel similarly stimulated and inspired by this book.
________________
As an additional treat, the book is accompanied by occasional drawings by Anthony Weeks. Weeks commendably summarizes some of the main points that the author is making.
Here is an example: 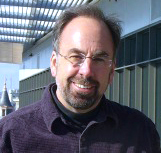 Bob Lucore is a student in the School of Library and Information Science at San José State University, where he works as a graduate assistant maintaining the School’s Drupal-based web site. For 25 years he worked as an economist, teaching at Colorado State University and Centre College and working for various labor organizations, before serving as Director of Research and Policy for the United American Nurses. He blogs on library issues at Attentive Librarian and on economic and public policy issues for Americans for Democratic Action.