This past semester I had the opportunity to take part in Michael Stephens’s Hyperlinked Library course. The course, especially the readings and discussions on reflective practice, teaching, and learning brought together for me the professional and the personal. A little bit about my background: my previous career was in German Studies, but a couple years ago my contract as an Assistant Professor wasn’t renewed. My wonderful, supportive colleagues said again and again that it was due to budget pressures, but deep down and for quite a while I felt I had failed. What the experience offered me, though, was a chance to reflect on where I had been and where I wanted to go.

From Germanist to Librarian

What drew me to LIS is the emphasis on helping others. I realized while reading the Rubin (2010) textbook for one a core MLIS class that the professions—teaching, librarianship, medicine, etc.—are about service. And several of those are the careers that have appealed to me. Yet something that had always bothered me about German Studies was my perception of its relevance. Certainly, some of my former students use their language and cultural competency skills (or become more open-minded and critical) because of what they learned in German classes. However, I still cannot articulate the purpose of the research I was doing (except, formulated a bit cynically, to get tenure). It was enjoyable and interesting to me, and perhaps a handful of other people read it. But that turned out not to be enough for me. In fact, being laid off brought this reality into relief because I could acknowledge my doubts more directly.

It seems much clearer to me that LIS careers have the potential to change people’s lives for the better and perhaps even to transform them. I see this in my work as a volunteer at the public library, teaching mostly older folks computer skills. An hour of caring, engaged conversation and guided play on the computer can change their mood and attitude and help them to begin overcoming their fear of technology. What matters most is that someone cares about their lives, needs, and problems and will take time to listen. They often tell me that the people in their lives won’t or can’t do that—or that they don’t have anyone they can turn to. Working at the public library is the best part of my week because I can often see its positive impact. And people often return repeatedly so that we get to know one another. This is the sort of work I can pour my heart and life into.

One aspect of changing careers that has caused me to grieve, however, is the notion that I had wasted over 20 years on a field that is no longer a part of my daily life. However, the readings on teaching and learning in the Hyperlinked Library course showed me the many connections between LIS and language teaching and learning. It has taken me time to understand and believe this, but no learning is wasted time or effort. Here are some connections between the two fields that will inform my work in LIS:

So I’m going to take my own advice. Nothing was lost in my career change, and I didn’t fail. In fact, something was gained. Ending one career has enriched my life and helped me find a field I can devote my efforts and heart to.

I know that many folks come to LIS from previous careers and other fields. I wonder what your experiences have been.

Stephens, M. (2011). Beyond the walled garden: LIS students in an era of participatory culture. 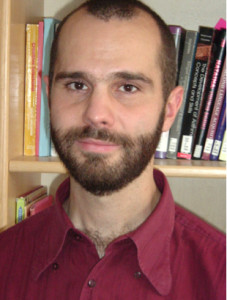 Darren Ilett is currently in his third semester in the MLIS program at San José State University. At the moment he is enjoying an internship at the Fine Arts and Design Library at the University of New Mexico where he is helping to create online instructional materials. Upon graduation he hopes to work as a subject librarian in an academic context and with a focus on instruction. In his spare time he likes to play Scrabble, read Patricia Highsmith novels, and watch old German movies.