I have been keeping tabs on the state of journalism over the last decade. I do this because it is part of my job as someone who helps build information literacy skills in students, but I also do this because the disruptive forces ripping apart journalism are related to forces impacting libraries. Journalism is at the epicenter of the earthquake, and we’re a bit more removed (so far at least). As media companies implode, merge, vanish, and reappear in new forms, I think it would do libraries well to sit up and take some notes.

One of these opportunities caught my ear when I heard Jeff Jarvis interviewed on WNYC’s On the Media. The interview entitled “Geeks Bearing Gifts”
(same title as his new book) challenges journalists to rethink what it means to cover the news. He discussed “the relationship model” of journalism. I was struck by this approach. It connected so directly to discussions about libraries and community that if I would go through the transcripts of the interview and replace the word “journalism” with “librarianship,” I could probably get it published in the library literature. In the least, I could probably pass it off as something David Lankes, Justin Hoenke, or Michael Stephens might have said.

Jarvis notes, “We have to stop thinking of journalism as a content factory, and we have to rethink it as a service.” He says that in the relationship model of journalism the press becomes a platform for community information. Jarvis uses the aftermath of Hurricane Sandy as an example. During this tragic event reporters covered the flooding, damage and drama, but the people on the ground needed actionable information. They needed to find wi-fi to contact loved ones. They needed to know how to get necessities. They needed to know what streets were closed and where to get gas. News outlets repeated stories and warned people of the danger, but they did not act as avenues for the public to share information. They reported things that everyone on the ground already knew. They didn’t report information that people on the ground actually needed.

“What we’re used to doing in journalism is deciding what’s important and then writing about it. I think the process of journalism doesn’t start with the story,” Jarvis states. “The process of journalism necessarily starts with listening to the public and only then finding the best mechanisms to help the public meet their needs. If all we do is keep churning out four hundred pieces of content a day, the same to everyone, then, that’s not a great service. And, I think we have to reinvent other ways to help communities to come together to share what they know.”

In summary, he says, “We may end up looking more like community organizers, and that’s a different, perhaps heretical, way to look at journalism.”

As we consider ways that libraries will evolve in the future, Jarvis’s thinking feels familiar. The “library as platform” is not a new concept, but it remains a concept not fully realized in most places. It is easier to imagine than it is to implement. I believe that the pressures on journalism are more dire than those pressing libraries, but clearly, librarians should continue to take them seriously. Digital disruption (disintermediation) is impacting not only journalism, but also music, television, film, and many segments of the economy. The forces they face and the obstacles they must overcome are not identical to those libraries will face, so we will have to come up with our own unique answers. But, we can still learn from their trials.

You can listen to Jeff Jarvis on On the Media here: 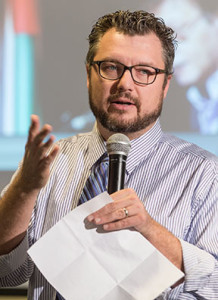 Troy A. Swanson is Department Chair and Teaching & Learning Librarian at Moraine Valley Community College. He is the co-editor of the recent book from ACRL, Not Just Where to Click: Teaching Students How to Think About Information. You can follow him on Twitter at @t_swanson.