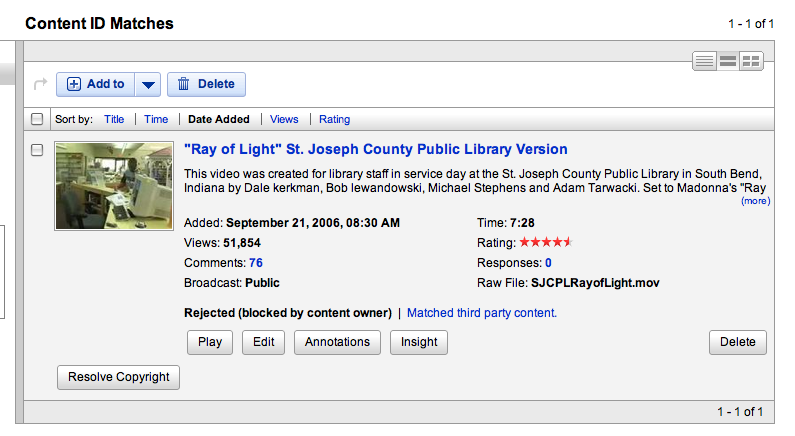 I recently heard from a colleague that Warner had pulled some Fleetwood Mac videos and it crossed my mind that “Ray of Light” might be found. Nah, I said, there are a billion videos out there. Well, RoL was found and pulled.

RofL was made for SJCPL Staff Day 2003 by my team in Networked Resources Development & Training.

We presented about the making of the video and showed it at Computers in Libraries 2004:

“Bob and I went out to CIL to present in the Learning Track on motivating and celebrating staff with technology. We wanted to show off the work we did on RAY OF LIGHT, the SJCPL staff day video. ROL is a fast motion day in the life of our library system which illustrates how EVERYONE plays a role in the library’s mission!

The presentation was a success and the audience seemed to really like the video! There were some whoops and hollars! Then we did questions and of course the discussion turned to copyright. Yes, we used ROL by Madonna with no clearance but it was as much fair use as it could be: not sold, distributed, or copied.

I told them we tried last year to reach out to Madonna’s people and never got anywhere. I think this is a great idea for libraries to internally and externally market themselves — hey Madonna… can you give me a minute of your time to chat about it?”

This is the perfect illustration of one of the major problems with copyright today. I want Michael to post the video online so that every library can see how great it is, but they’ll get slapped with a cease-and-desist order if they do. When we discussed this informally at the conference, Bob said they tried several times to get through to someone at Warner Brothers in order to follow copyright compliance laws, but no one would give them the time of day.

So here we have the little Library that could and did (David) that can’t get the attention of Warner Brothers (Goliath) just so they can show the fantastic video they did for their staff in-service day (and let me tell you, the video TOTALLY ROCKS!). Would SJCPL make a single dime off it if they post it online? No. In fact, it would probably cost them loads in bandwidth. 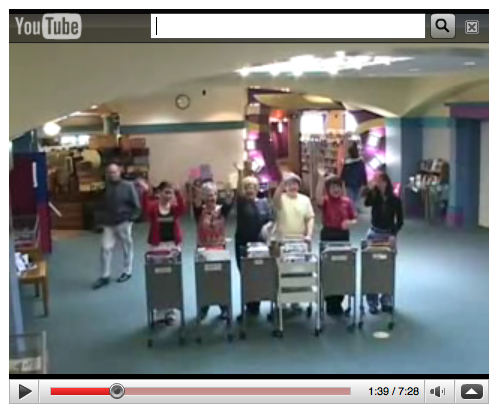 So what is the Library supposed to do in a case like this? They can’t afford to be a test case or a protest case, but their video deserves to be seen beyond the borders of their building, if for no other reason than to inspire other librarians. Heck, Apple should be promoting how the staff used Mac software and hardware to put together the homegrown video and maybe then they could make some new inroads in the library market (SJCPL is one of the few public library Mac houses I know of).

So I ask again, what can we do to help them? Anyone have Madonna’s home phone number? Should we start an online petition? Is there any way to release it under a Creative Commons license that fully credits Warner Brothers?

Alex Zubillaga, Warner’s executive vice president for digital strategy, declined to say whether the new accord provided Warner with any compensation for past use of the company’s videos and songs by YouTube users.

But he said that “our general philosophy is, we want to lead through innovation as opposed to litigation. The user-generated content phenomenon is something we believe is only going to continue to grow and is probably unstoppable. We’d like to be a part of it and make it a great experience for consumers and make sure we and our artists are being rewarded.”

YouTube, based in San Mateo, Calif., says its clips are viewed more than 100 million times a day. Warner’s labels, which include Warner Brothers Records and Atlantic Records, have been particularly eager to market to that audience.

The video had 51,000 hits. I think it still holds up as a unique way to  promote a library and emphasize how important every member and every process is to what we do. Heck, I used the video every semester in my classes – pulling up YouTube on the classroom PC.

Today, I received this:

Your video, “Ray of Light” St. Joseph County Public Library Version, may have content that is owned or licensed by WMG.

No action is required on your part; however, if you are interested in learning how this affects your video, please visit the Content ID Matches section of your account for more information.

So I ran back to Jessamyn West’s post “What Happens in a YouTube Copyright Dispute?” where Jessamyn reports on two disputes she’s received.

In the second case, I really feel like I have a decent Fair Use case, so I filled out this form. The form says that I think the clip is fair use under copyright law. It’s my responsibility to “understand the law” according to YouTube, and that is my understanding of it. I had to “sign” it and also type [well copy/paste] the line that says I’m not intentionally abusing the dispute process. After I did that, I was sent to this help article to see what will happen next. The article warns

If the content owner disagrees with your dispute for any reason, they will have the option to submit a copyright takedown notice which will result in the disabling of your video and/or penalties against your account. To avoid penalization, only submit legitimate dispute claims.

So, we’ll see. I think I’m right. I hope the copyright holder thinks so too. At the very least they will be bored with four minutes of windshield rainstorm before they even hear their song and even then they’ll probably be straining saying “Is that it?” At the worst, I’ll get some sort of “penalty against my account” of unspecified awfulness. So, for those of you too timid to try this at home, or possibly being cavalier about the audio you swipe, that’s my report of the consequences … so far.

RofL is different – it’s NOT fair use under current copyright law for the simple fact we used the entire song plus Smashmouth’s “All Star”, so I’m considering this as the best course of action: I’ll delete the audio or choose some innocuous track YouTube supplies and then instruct folks to queue up and play Madonna’s “Ray of Light” and watch the video that way (although Greg Schwartz suggested “Dark Side of the Moon” – a fascinating choice as well). That way we can keep the video up for folks to see an maybe adapt the concept in some way for their libraries.

And maybe Madonna might see this post and just give me permission to use the song? 🙂 But I am also interested in what TTW readers think. What would you do? What does this say about the current state of copyright in our digitally remixed world? What’s your definition of “Fair Use?”