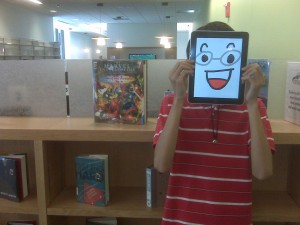 (a brief interview between Portland Public Teen Library @justinlibrarian and Portland teen @davidchuphoto)
What are you using it for?
I’m usually sitting in bed and using it as a computer instead of a laptop.  I would go back to a laptop if I got a MacBook.
What are your favorite apps?
Twitter, ABC Player, Doodle Jump, Tap Tap Revenge 3, Safari
What would you like to see the library do with Ipads?
Libraries should lend them out as ebook readers or portable computers and people could read them in the teen lounge.  People could be more relaxed with the iPad in the library.
Do you use it in school?  For what?
I replaced my school netbook with the iPad.  I use it for notes, create slideshows, and look up things on the internet.
Do a lot of teens have iPads?
I only know one other teen with an IPad.
If not, do a lot of teens want iPads?
At first, they did (especially at school).  If I use it outside, people passing me on the street ask me about it quite a bit.
How much do you read on the iPad?
I read a lot of articles on the internet.  Ebooks?  Not so much.  I haven’t purchased any ebooks.  I’ve  just downloaded public domain books.  I haven’t bought any ebooks because I don’t have enough money and I don’t have much interest in them.
What would you like to see the iPad of the future do?
Take pictures, a higher resolution, more storage on the base model (32gb as the first model!), and multi-tasking.
If a teen were interested in the iPad, would you tell them to get one now or wait and why?
I’d tell them to wait because I think the next one will be better.  iPhone 4 already makes the iPad obsolete.