Note from Michael : I am honored to have written over two years of The Transparent Library with Michael Casey. I am pleased he took me up on an offer to do a guest post about participatory service for the Salzburg Global Seminar week. I asked him to explore where we’ve come from 2005 and where we are headed. This was the topic of a blog he started in 2005 and a book he co-authored in 2007. But the world has changed a great deal since 2005. Perhaps the biggest change has been that of the economy derailing many initiatives and services in public libraries. In the end, however, I think you will see that Michael still has a lot of optimism regarding the strong future of public libraries, especially those that embrace a participatory service model.

Participatory library services have come a long way over the past six years. You don’t have to look far to see libraries participating in social media outlets, interacting with their community through blogs and SMS, and polling their users with online surveying tools. Entire industries have grown up around the idea of the participatory library, just take a look at Springshare.

We see many great examples of public libraries using services like Facebook to reach out to, and engage, their community. The New York Public Library has almost 42,000 Facebook fans, Hennepin almost 6,000. Many other libraries around the world have created a presence on Facebook. 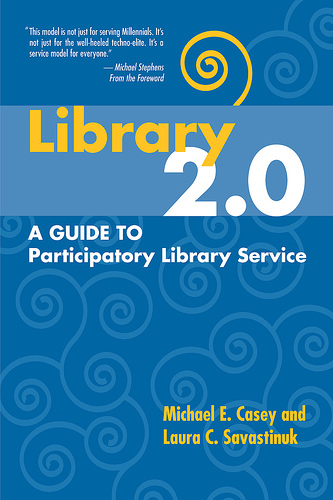 But in those two examples, as in so many other library Facebook pages, you see some interaction between the library and the individual library user, but most of what you see is one-way. Most library Facebook pages are used for announcements and events notification, not true communication.

Yet this is just one example. Take a look at the Blogging Libraries Wiki and click through to a few library blogs. Many of them are no longer active. Others are gone and the URL simply redirects to the library’s homepage. And when was the last time your local library sent you a survey link that asked you for your ideas? For many of you, the answer is either “never” or “not for a few years”.

Over the past six years we’ve seen and heard a lot of push-back regarding the use of new social tools in the library. One quote that comes to mind is from 2007, “Right now people are enamored of blogs and wikis and Facebook and this sort of thing.  But that’s this year’s set of technology.  Five years from now we’ll be talking about a whole different set of things.”

Ironically, the world still uses those same tools today. The only difference is that in late 2007 there were 50 million active Facebook users, today there are over 800 million.

So with this huge audience available to us, why haven’t we made greater use of the tools at hand? Why haven’t we moved beyond the idea of just talking to our community to actually engaging them? Or, to quote Tim O’Reilly, “How do we get beyond the idea that participation means “public input” (shaking the vending machine to get more or better services out of it), and over to the idea that it means government building frameworks that enable people to build new services of their own?”

The participatory library is open and transparent, and it communicates with its community through many mechanisms. The participatory library engages and queries its entire community and seeks to integrate them into the structure of change. The community should be involved in the brainstorming for new ideas and services, they should play a role in planning for those services, and they should definitely be involved in the evaluation and review process.

These are not new ideas. I put them to paper in my 2007 book. Some critics of that book argued that libraries have been doing these things for ages. I wish I could say I agree.

The economic downturn has created very difficult times for libraries in this country. We’ve seen many public libraries struggling to stay open and remain relevant in their community. Many libraries have had to reduce hours and lay-off staff. Some have reached out to their communities, not only for short-term help in raising badly needed cash, but also for long-term help with planning.

The importance of this participation cannot be overstated, especially in these difficult economic times. Taxpayers are more and more reluctant to part with any percentage of their diminishing paychecks. Getting them to participate, at any level, will go a long way towards gaining their buy-in.

With limited resources, public libraries need to struggle for every dollar, and with limited tax revenue, funding agencies will part reluctantly with every dollar. It’s up to the library to be heard, to get its community of supporters to be heard. When faced with the question of who to cut, those funding agencies must know that a cut to the local public library can not be done quietly Public libraries are a core and critical resource in the community, and public library supporters are vocal and they vote.

Take a look around your library. Is there someone in charge of your social networking presence? Better yet, do you have a group of librarians charged with reaching out on Facebook and Twitter and, soon perhaps , Google+? You take reference questions over the phone and via text, why not through those other social outlets? And how are you involving those Facebook fans in your library’s planning process? Are you asking them to participate?

Your library’s blog may be shuttered for good reason — maybe your Facebook page has far more readers. Or, perhaps your blog went dormant simply because you didn’t assign someone (or some group) with the responsibility to keep it going. Whatever the case, spend a little bit of time reexamining all of the ways you’re reaching out to your community and reallocate resources in order to most efficiently talk to, and talk with, that community.

There are far more tools available to us today than there were in 2005. And our communities have grown over these past six years. Kids and adults of all ages are now far more involved and engaged through social networking outlets. The ideas of participation and transparency are no longer new — many in our community now expect these things as a standard part of organizational operations. By taking advantage of those available tools you may find that renewed efforts by your library are met with much greater success today than ever before.

It’s far from the end for public libraries. It’s easy, in these tough times, to only listen to the naysayers and prognosticators of doom, to only hear those in our community calling for the elimination of libraries. But limited tax revenues, the Internet, and eBooks are not burying the public library. Limited tax revenues will force us to become more efficient, the Internet is part of our future, and eBooks are simply another delivery vehicle. We control this future, and we can make it a successful one by making full use of the tools at hand.

This post is a reflection/response to questions posed at the Salzburg Global Seminar program Libraries and Museums in an Era of Participatory Culture, exploring the challenges, solutions and potential for participatory services within libraries and museums.

Special Thanks to the Salzburg Global Seminar  and IMLS for the invitation to participate in this event.