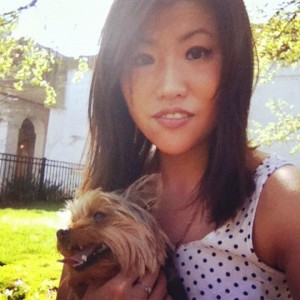 This is a guest post I asked Lian, a volunteer in the Skokie Library Digital Media Lab, to write.  What is life like for DML volunteers and workers is a common question from people interested in DMLs, I hope Lian’s post will help explain what her volunteering looks like.  – Mick Jacobsen

With four tricked out Macs, a chroma key green wall, Blue Yeti microphones, a drawing tablet, scanners, various electronic instruments and more, the Skokie Public Library Digital Media Lab is the place to be if you’re looking to create.  Each of the four Macs at the DML is considered a station, and each station has unique software that appeal to different patrons depending on the type of project they are working on.

As a volunteer at the Skokie DML, I had no idea what types of patrons I was going to encounter or what kind of help I would be able to offer.  Much to my relief, a lot of the questions that I get asked are often basic computer questions that anyone familiar with a Mac can usually answer.  However, I do get asked questions on some of our more advanced software, such as Final Cut Pro or Adobe InDesign, questions that I am only able to answer with a little bit of research online or in the books that we have in the DML.

What I love the most about patrons at the DML is that they are always willing to help each other out, so even if I can’t answer something I can always ask another patron to see if they know the answer.  The sense of solidarity comes from the fact everyone is working in this shared space together, a place where there is so much equipment and so much software that no one person can claim to be an expert at everything.  Skokie Public Library also attracts a culturally diverse patron base, so it’s not unusual to see someone editing a video on an Albanian wedding alongside another who is editing photos from her childhood growing up in Europe.

The skill levels of the patrons vary, from those who are very technologically savvy to those who can barely use a computer.  There are often high school or college kids who come into the lab and know exactly what they need to do, whether it’s video editing or remixing that song that they love so much (NO PROFANITY, PLEASE!).  But we also have a lot of older patrons who may need help scanning photos, others who just want to watch a Lynda.com video and some who might just want to learn how to use a Mac.

Even though some of the older patrons seem to have more difficulty with the software programs, it never seems to deter their determination to get their projects done.  One lady was using Dreamweaver to edit her church’s website, while another man was using Adobe InDesign to edit a brochure that explained his recent world travels, and both of them told me that they were just beginning to learn how to use these software programs.

The most excited patrons are always musicians.  When they see all the equipment we have here, you can almost see their minds reel at how they can use the DML for their upcoming music projects.  They often comment on how expensive the equipment and the software are and how many of them would not be able to afford it on their own.

Whenever I see someone poke their head into the DML, I always explain to them what the DML is for and how they can sign up for a station.  You may never be able to predict why someone will sign up for one of the stations at the DML, but you can be sure if you don’t tell them about it they may never know that these resources are available.

“Lian Sze is a MLIS student at Dominican University and will graduate in May 2012.  She is also an intern for the Public Library Association and Northwestern University.  In her spare time, she is a bike enthusiast, gardener, traveler, yogi and foodie. Despite her love of technology, she still writes snail mail.  She is currently living in Chicago.”