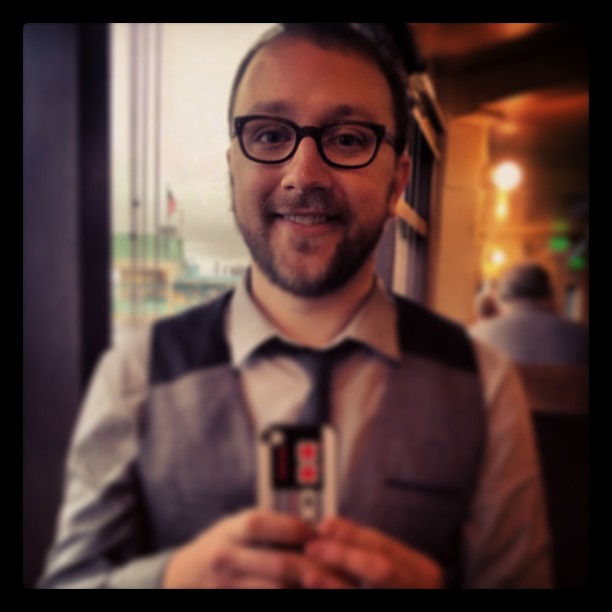 “My goal was to come to Portland [Public Library] and make the teen library a success,” says Justin Hoenke, aka Justin the Librarian—blogger, music enthusiast, “retro video gamer,” and fearless programs creator. “Being a teen can be a crazy thing…. We want to help teens 12–19 find the best path toward adulthood.”

As the first teen librarian hired by Portland (in March 2010), Hoenke is more than meeting his goal. Innovations include Make Music at the Library, a program in which teens create their own tracks and albums (and edit them in Hoenke’s office), and a storytelling-focused “make your own video game” that’s a joint venture with the Telling Room, a local writing organization for young people. [Hoenke recently accepted a position as teen librarian at Chattanooga Public Library.]

As I’ve said on Facebook, I can’t wait to see what wonderful things he does in Chattanooga!

Here is the text of his M&S nomination form:

Reasons for nomination & Describe one event, project, or situation that illustrates your reason for this nomination:

In Justin’s work as Teen Librarian, he strives to deliver excellent, user-focused service, innovative programming, and opportunities for learning and growth for his constituents. Justin has been the driving force behind his library directly engaging with the teen community in Portland. He also shares his ideas and learning with the broader LIS community in a positive and encouraging way.

This nomination includes focus on the most important project or situation in Justin’s work: his innovative projects are all centered around services to teens and the library’s teen advisory board (TAB). Not only does he create innovative programs but he shares with the broader LIS community as part of this goal. Because he is an invited Tame the Web (TTW) contributor, Justin has shared some of his innovative projects and learnings with the TTW readership. These projects include:

This program to get devices into the hands of the young people PPL serves was conceived and implements by Justin. Throughout the three posts he shares his procedures, critical thinking and his failures. His sharing at TTW provides insights and more for those reading about his experience:

You’re gonna lose items…and it’s ok.  It’s all part of the learning process.  Libraries lose a lot of materials with high value – think about when an audiobook collection goes missing or a disc needs to be replaced in a multi item set.

The teens have to know that they’re responsible.  Fines may not be the best way to do this, but that’s a bigger issue for another time.

Teens want to have an experience.

Credit checks/signed applications from parents/etc will not work no matter how hard you try to push this on teens.  Teens can barely keep track of what they’re going to do after school, let alone understand what signing a piece of paper means.  Perhaps a better way forward is for the people working with these teen patrons in the library to make individual calls on each lender.  It may be a good idea for those working in the teen library to take some time to sit down with the teens that potentially want to borrow these devices, show them what they can do, and explain in fuller detail what it means to be “selected” for this program.

Make Music at the Library

Justin worked with a group of teens to write and record a song. This is an outstanding example of a user-focused, creation-based program

Nominator Peter Bromberg has maintained a document gathering Justin’s ideas and work on teen-centered projects. The document gathers snippets of Justin’s own words, shared via social tools that illustrate his deep commitment to teen library users and the LIS community.  He submitted the file for inclusion in this nomination:

Our library really didn’t have much of a teen program before I got here.  Lots of books but a lot of outdated stuff, basically no programs, and that’s about it.  I’d like to think that I’ve changed that.

Circulation is through the roof we’ve got programs every week, and our name is out there more.  People seem to know who our library is and I‘d like to think that I had something to do with that!

I’ve been really big into getting our name out into the library world. When I got here I felt like everyone took an isolationist view on libraries…who cares what else happens in the world, we are fine here in Cape May County.

What have you done to promote library/TAB through social software?

Basically, I rely on these two sources to reach out to teens and through my use of these sources I feel like I’ve really connected to teens.

They think of me as a friend and that’s what it is all about!

What new programs have you done that have attracted teen participation?

How have you helped shift thinking/culture in the library with regard to teens?

I feel like I’ve made the other people I work with see teens as real human beings.

Before I got here, they had this buzzer in the teen room that they buzzed when the teens were being loud.  They treated them like wild animals that needed to be punished or something like that.

Now, they talk to the teens.  They respect them.  They know some of them on a first name basis!

What other wonderful changes have you made?

Positivity.  I feel like I bring an energy to the people I work with.

I try to keep spirits up because when spirits are up, good things get done.

Happiness is spread and the world is a better place!

Sharing with the Wider LIS Community

Justin also spends much of his free time sharing his ideas and insights with the broader LIS Community. He tries to share consciously – and does so effectively. When many of his peers are clamoring for recognition and fame, Justin continues to share quietly with the LIS community. His writing extensively about video games in libraries (https://tametheweb.com/2011/08/03/8bitlibrary-com-the-collected-writings-of-justin-hoenke-2/) lead to invitations to speak and share ant national conferences and at a conference this year in Germany. The members of the Zukunftwerkstatt (Future Workshop) in Germany funded Justin’s travel to speak about the importance of games and services to young people at the 2012 Bibliothekartag.

We are pleased to submit this nomination for a dedicated, hard-working and forward thinking librarian. We are nominating him for his relentless innovation in service to teens and his generosity of spirit in sharing the process with librarians all over the world through social media.

Photo: Justin at breakfast with Michael, Seattle, January 2013 via Instagram.