Our readings for New Horizons, New Models examined what forwarding thinking libraries are currently doing and envisioning as important future concepts. Of course, excessive future orientation can push some upstart librarians into technolust and, as Schmidt points out, make them forget about the people who are central to the library’s mission. To my surprise and satisfaction, space and people are recurring themes in this module’s readings. A focus on space and people dovetails with the theme of my #hyperlib blog. Today’s public library is an important social space. Libraries serve multiple functions in diverse communities. The library is a public service and a public space for all. This is especially important in this era of increasing privatization of public space and library service.

The readings got me thinking about my spatial learning from urban planning school ten years ago. Fields that deal with the built environment — planning, architecture, geography — tend to look at space with a heightened reverence. Space is not a given; space is a gift! Urban theorists like Edward Soja and Michael Dear, who are both cut from the postmodern cloth, consider space a generator of action and activity. (Their spatial lens benefits LIS’s emerging interest in space; library theorists should be reading their work.) It became apparent that spatial tenets from the planning realm could enrich the current conversation about libraries, space, and people.

A brief note on space…

The space we’re talking about is the subject of many dissertations from across the disciplines the world over. However, space limitations (terrible pun!) in this essay restrict my allowance for backgrounding. An extremely concise primer follows.

Throughout most of human history, space was considered no more than an empty container in which things happened. Space was passive, inactive, and inconsequential.  The prevailing concepts of time and history ruled thought. Space was irrelevant.

Changing conceptions of space arguably began in France in the 1960s, an era marked by widespread spatial turbulence (riots, protests, war). One theorist stands out. Michel Foucault is known for his studies of space, knowledge, and power. His work examined how space itself exercised control over bodies. Foucault’s evidence of the power of space famously included idealized prison buildings and militaristic city design. To Foucault, space was an active agent affecting our lived experience.

Today, space is a cause, not an afterthought. Across the disciplines people are embracing the explanatory power of space. We’re finally seeing this spatial thinking permeate the library realm.

Space is ACTIVE — Space itself is vibrant and exciting. A stimulus occurs when space is activated. People talk, conflict brews, ideas flow. Spatial activity leads to creation. People, objects, and ideas circulate within space, creating a self-sustaining environment that re/produces activity. Libraries should capitalize on this by including spaces that encourage vibrancy over staid, Shhhhh’d, study. The entire library mustn’t be converted into a jungle gym, but perhaps one space in it can be! We see this spatial awareness in the rise of library Makerspaces that encourage unlibrary like activities such as cooperative tinkering (see Horizon Report and Maloney). We see this in new YA spaces that encourage flexible, mobile, and customizable seating arrangements to improve user experience (see Bernier et al).

Space is CONGREGATIVE — Space brings people together. Space has the power to gather people both alike and disparate. Public plazas and private living rooms bring us closer. Commonalities are identified in these spaces. Groups form. Partnerships develop. Spatial congregation creates community. While the Social Web brings us together in cyberspace, it lacks what Soja calls the “stimulus of agglomeration” that physical space affords. You cannot disconnect with one click in physical space! Libraries must capitalize on the congregative quality of space. As Casey says, libraries can do this by turning outward and asking people what the community needs. Some communities need more than traditional book lending services. The Los Angeles County Board of Supervisors recently approved a plan to support President Obama’s controversial “no deportation” policy. County branch libraries will serve as information centers offering immigration program resources. This works because County of L.A. public libraries are trusted spaces that support diverse communities.

Space is PEOPLE CENTERED — Space is “powered up” on its own, but powerful when people enact it. Our use activates the generative power of space. Of course, space must be nimble. We know people can be fickle. People’s needs change and dynamics shift. Space must adapt to these fluctuations. Intelligent spaces evolve without sacrificing their active, congregative qualities. We see this quality in the conception of third s/place, defined as a spatial alternative to one’s home and work site that brings people together. Public libraries function as a third place.  A high performing library third s/place is flexible, malleable, and supportive of people’s unique needs.

Although emerging technologies enhance our connectedness, emerging tech cannot replace the generative power of people coming together in physical space. Let’s keep that ideal in mind as we gaze out over the horizon. Libraries that put space and people first are looking in the right direction.

Jonathan is a Los Angeles Urban Planner and MLIS student at SJSU’s School of Information. Jonathan’s professional interests include library design, libraries as public space, and the role of public libraries in urbanized communities of color. His work has been published in UrbDeZine, Public Libraries, Public Library Quarterly, and SJSU SOI’s Student Research Journal. He earned his M.A. in Urban Planning from UCLA Luskin School of Public Affairs in 2005 and studied political science and architecture as an undergraduate. Jonathan will complete the MLIS in 2016. 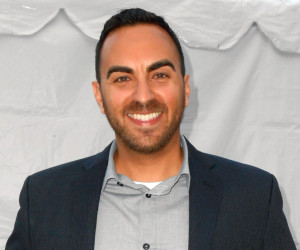