Skip to content
Librarianship has long been informed by ideas outside of the profession that are then brought into it. One of the intersections that has always interested me is libraries and film. Some areas of this overlap have been well documented, while others represent very new terrain. The portrayals of libraries and librarians in movies, and more broadly librarian stereotypes, as the recent title The Librarian Stereotype addresses, has been of continued interest to the profession–entire books and films have examined the topic. These representations have interesting things to tell us about how others conceive of librarians and what that means for our work (see, for example, Nicole Pagowsky and Erica Defrain’s excellent article on how librarian stereotypes and faculty perceptions impact our instructional roles). But apart from the questions of our professional identities as represented in popular culture, I have found a lot of ideas worth exploring on other aspects of film, TV, and media as applied to libraries.
Like a number of other librarians who provide information literacy instruction, I often incorporate media into the classes I teach. This can mean anything from to asking students to look at different news sources covering the same topic and critique the source’s biases, to using search examples that draw attention to problematic representations of women and people of color in pop culture. One of my best-received approaches to using media in the classroom was showing students three short clips from TV shows that related to libraries or information sources such as Wikipedia, and using these excerpts to start a discussion about how students use the library and other information sources. Some really interesting and enjoyable discussions were spurred by these 1-5 minute clips. I found that examples from movies or TV shows illustrating information literacy concepts can resonate much more with students than talking about these topics generally, and allow for a way for learners to express their own knowledge and understandings in relation to the library’s own sometimes confusing rules and expectations. This article has more details on my use of TV clips in library instruction.
The ways that libraries and librarians are represented on-screen provide alternately frustrating and funny insight into the ideas that others have about our profession. But when we think more deeply about these representations they express complicated positions that can bring up important questions about our collective identity. I have looked at the ways libraries are portrayed in two acclaimed comedy series, Parks and Recreation and Community, and how library anxiety is represented in them. The catch phrase from Parks and Recreation describing the fictional town’s librarians, “Punk ass book jockeys,” is part of the show’s tongue in cheek characterization of librarians, yet an undercurrent of distrust and unease with libraries is present within this satirical take. Film and libraries have a long history together, but relatively little research has been done in this area. Contemporary movies appear in the library literature more often, including an analysis of Party Girl, the classic 90s take on one young woman’s turn from the club scene to pursuing a library degree, and the information seeking habits manifested in The Big Lebowski. What many of these library/film studies combinations have in common is an interest in critically evaluating the media’s conceptions of libraries and using film analysis as a lens to examine larger issues of professional identity.

While these are just two areas of the intersection between libraries and film that I have considered, there is lots of great work being done in the realm of applying visual and popular media to aspects of librarianship. Joel Burkholder’s This Is Info Lit tumblr focuses on real world examples of information literacy, while Stephanie Alexander’s recent LOEX presentationdescribed how she used satirical news sources in her classes to teach aspects of the ACRL Framework for Information Literacy. These creative projects make apparent that there is no shortage of ideas to be explored within librarianship to meaningfully improve the work that we do, whether through theoretical approaches or everyday practices.

Eamon Tewell is a Reference and Instruction Librarian at Long Island University in Brooklyn, NY. Eamon has published and presented on the topics of popular media and active learning in library instruction, televisual representations of libraries, and critical information literacy. He tweets at @eamontewell. 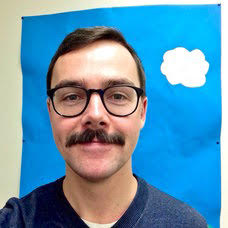