Republican Senator Ted Stevens from Alaska has introduced a bill called “Protecting Children in the 21st Century Act” (#S49.IS). This is simply the new version of the DOPA bill, including all the original DOPA propositions with two additional Titles added: restricting the sale of personal information of children for marketing and raising fines for child pornography violations. Because DOPA is now sandwiched between these two other things that sound hunky dory, it is more likely to pass than it was last time.

Now, why should librarians and their patrons care about DOPA? As I said the last time around, the bill would “require recipients of universal service support for schools and libraries to protect minors from commercial social networking websites and chat rooms.” If your library gets E-Rate funds, this applies to your library. Social network websites are defined as:

That is pretty much every website out there that allows interaction of any kind with users: Amazon, Flickr, Yahoo Groups, Flickr, MySpace, Blogger blog with comments. Libraries accepting E-Rate funds would have to block all of these from minor users as a result of the passage of this bill. 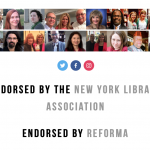