Via Melissa, one of my students comes this article from Kennewick, WA: Kennewick library Giving StUdents the Boot.

Kennewick High School students have been banned from using the library across the street from their school while classes are in session.

Students who often walked across the street to the library during lunch arrived at school last week and learned they were no longer welcome there — at least not between 7:30 a.m. and 2:10 p.m.

“I think it’s stupid that they call it the public library and it’s not open to the public,” said Lynden Rothfork, a 15-year-old sophomore.

Mid-Columbia Library System officials say they aren’t trying to keep kids out of the library. They want to make sure kids aren’t skipping school. And anyone who looks like they could be in high school can expect to be carded before being given the OK to go inside.

Later, here’s where it really breaks down for me:

Library staff members are left to use their judgment to decide whether someone looks young enough to be in school. Those who appear younger than 18 have to show their ID.

“There will be some training for staff to make sure … they’re fairly and consistently applying the policy,” Cox said. “We are not going to turn anyone away.”

But, a young couple with a toddler were turned away last week after a library staffer suspected the woman was younger than 18.

The staffer asked the petite woman if she was in school and then for her ID. The woman said she was 24, but couldn’t prove it so she was told she has to leave. The woman explained that she was with her husband and son, but the library staffer wouldn’t budge on the rules.

The woman said the library staffer was discriminating against her simply because she looks young, and the staffer replied that if she didn’t leave, they would call the police.

“I would hope that it wouldn’t happen,” Cox said after hearing about the incident. “That raises questions, and I will be following up with staff on that.”

Placing the burden of policing the library on staff is a bad choice in my opinion. I wonder if there are other solutions that might be easier on everyone. Another point the article makes is that some students used the library during lunch. With the new policy they can’t.

“I used it every day. The library in school doesn’t always have the right resources,” said Taylor Crawford, 17, a junior.

Cox said he wasn’t sure why students couldn’t use the library during lunch, but that was the rule based on the joint agreement between the library board and the school district. “Ease of administration” of enforcing the policy likely prompted the lunchtime restriction, he said.

“Ease of administration” ?? Oh My!

And did you catch this oh so typical gem:

Cox said the policy was developed jointly with the Kennewick School District to deal with truancy issues after a patron complained about truant students in the library.

A patron? One? Say it ain’t so, Kennewick! Why does it seem that we jump like crazy when one patron complains about young people in our libraries when other similar thing situations are tolerated? I’m reminded of the policies at Jenny Levine’s home library that prevents people from actually checking out new books for two weeks after they arrive in the library. Why hasn’t that changed? I’m sure some patrons have expressed concern. I just don’t get it.

I’ll be using this in classes for discussion. What changes would make the policy more user-centered? What changes would take the role of “policing” off of the library staff. What story might these students remember about their library as they grow up?

What do you think? 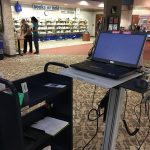 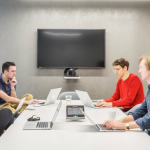