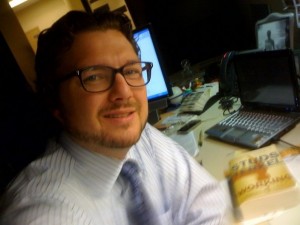 When I finished library school around the year 2000, the shift from print to online was well underway. OPACs were common place, CD towers had already migrated to online databases, and teaching search strategies to students was seen (by librarians and faculty member alike) as an essential piece to teaching the research paper. Yet, even as the changes were happening around us, the mental models used by our students were not moving as quickly. The essential
information literacy problem we faced was that students tended to believe almost anything they found on the web, especially if a website had a nice design. The default mental model was to trust things in print, and the web was viewed as a de facto substitute for print.

Over a decade later, the information landscape feels quite different. We live in a world where Stephen Colbert’s truthiness  dominates public discourse. The Onion, Pets or Food, and MalePregnancy.com are well-known. State of the Union addresses are opportunities for “you lie” moments which are enhanced by Twitter battles waged between partisans. Today, our mental models have flipped.Students come into classrooms today and their default is different. They no longer trust sources. They suffer from “photoshopification” as described by Farhad Manjoo:

If you live in a world where everything is possibly fake, where every photo you see could have been Photoshopped, it gives you license to dismiss that photo. This is true not only of photos but of basically all kind of documentary evidence that comes at us these days. We can always assume that there’s been some digital foul play there and that it’s possibly not a truth.

Today’s students entering college take a defensive stance with information sources. They are skeptical by default. At the same time, most students that I see have a poorly developed process for sorting information and making decisions. The websites claiming that vaccines are harmful are equivalent to the sites with mounting evidence to the contrary. Research, opinion, journalism, and spin all combine into a cacophony where it is easier to believe no one than to make decisions.

The “photoshopification” of students runs counter to the traditional cognitive development outlined by William G. Perry in the late 1960s. Perry’s scheme has nine phases but generally moves students from an initial absolutism and faith in authority, to a relativistic stance that abandons right and wrong, and ends with a values-based approach to knowing [see Perry, W. (1970). Forms of intellectual and ethical development in the college years: a scheme. New York: Holt, Rinehart, and Winston, Inc.]. Based on the assessment work I did a decade ago, I would say that Perry generally described the students I saw at that time. Students were often too trusting of sources, especially online sources. But, the problem that I encounter today feels markedly different. The problem today is that students are untethered to knowledge and the process of public debate. In the past, students may have taken an absolutist stance with an underlying faith in authority, but today they have lost their faith. The idea of “authority” has been diminished.

For instruction librarians and the faculty with whom they work, the answer to the problem of the past and the answer to today’s problem are related. We must teach students about credibility, authority, and source evaluation. But in 2000 we taught people credibility in order to teach them what not to believe. Today, we teach credibility with the hope that they believe something. In fact, I would say that we need to go further. We need to challenge students to examine their personal beliefs and consider how knowledge is created. The concepts of measurement and observation can form a mechanism for students to use to tether themselves back to knowledge. Librarians spend a great deal of time working with faculty members teaching students how to search various online tools, but I would say that it is just as important for us to be working with faculty members to teach students how to think about information.

Troy A. Swanson is Department Chair and Teaching & Learning Librarian at Moraine Valley Community College. He is the author of the book, Managing Social Media in Libraries. You can follow him on Twitter at @t_swanson.