There’s lots of talk about where we are headed these days.  What is our future?  Will we go the way of the dinosaur and suburban mall?  Seth Godin seems to think that we’re doomed while Toby Greenwalt and an army of librarians seem to think otherwise.  I’m gonna go out on a limb here and say that the future of the public library is right in front of us.  And boy, does it look wonderful. 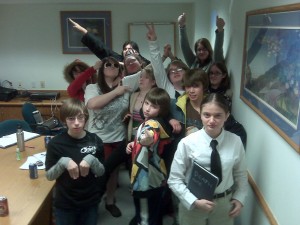 Teens at the Graphic Novel and Manga Club, Cape May County Library

We need to look no further than to the teens that are using the public library to see the future.   The library of the 21st Century has been characterized as being less of a library and more of a community center.  This practice is already in full effect when it comes to teen librarianship.  A great deal of a teen librarian’s focus is programming and getting teens into the library to create lifelong users.

Programming brings teens into the library and gives them community.  Teens get a chance to interact with each other and share an experience.  One element that cannot be taken away no matter how much technology grows is human interaction.  Think of the modern supermarket.  Sure, the self checkout is great in a pinch, but don’t you just always find yourself going to a regular checkout for the interaction?  People working and collaborating with other people will drive the public library into the future.  Creating a third space where people share ideas and media will keep the public library relevant in the 21st century.  The development of the teen space in the public library can be seen as a microcosm of this idea.  Teen spaces are designed for use by a specific age range (usually 12-18 years old) and include many forms of media and technology all packaged together nicely into one area.

The next step is to expand.  In order to accomplish this, we must embrace our sense of  adventure and open our minds.  Let’s take the ideas in teen librarianship and apply them to the organization as a whole.  For example, we need to take a look at the individual populations we serve.  It’s not as simple as children, teen and adult anymore.  Think about the specific needs of each group and create programming that suits their needs.  With programs designed for specific needs in place, users will feel more of a connection to their public library.

I put up the image of the teens at the Graphic Novel and Manga club to highlight this point.  Two years ago, graphic novels and manga were considered just an extra part of the collection at my library.  The genres were lumped in together with fiction (and sometimes non-fiction, specifically 741.547) and nothing was done to cater to the needs of this specific user group.  I recognized this and vowed to make a change.  My first step was to set aside an area for these collections.  It was a success.  Graphic Novel and Manga circulation rose 56% from 2008 to 2009 and a new breed of patron started using the library.  These were people who I had never seen in the library before.  My mission culminated with the development of the Teen Graphic Novel and Manga club, a program which meets once per month to discuss anything and everything related to the genre.  And it’s beautiful.  On average we have 13 teens every month attend the program.  These teens come from all different backgrounds and different high schools.  They are all unique in their own way.  Yet, they come together for 2 hours every month to share, collaborate, learn, and enjoy life.

The library is already the ultimate sharing institution.  We need to redefine what we mean by sharing to include all sorts of things.  I’m just gonna say it.  We have to get rid of the idea that we’re all about sharing books and media.  What we have to embrace is the idea that we’re sharing life.

The Library as a Community Center/Third Place:  Links for further reading

The Library as a Community Center by Barbara L. Anderson (PDF)

Libraries as the Third Place by Kelly Jensen

Library as Place via Library Garden

The Future of Libraries, With or Without Books by John D. Sutter

Library of the Future by David Lee King